A Teaspoon Of Honey.

The inspiration… of a teaspoon of honey.

One of the golden rules of running a relay is that you never look behind you for an outstretched baton… but I’ve found that some things being exchanged are just too precious to not visually confirm. Besides, if you’re fast enough… it won’t matter… you’ll make up for it on the back straight anyway. 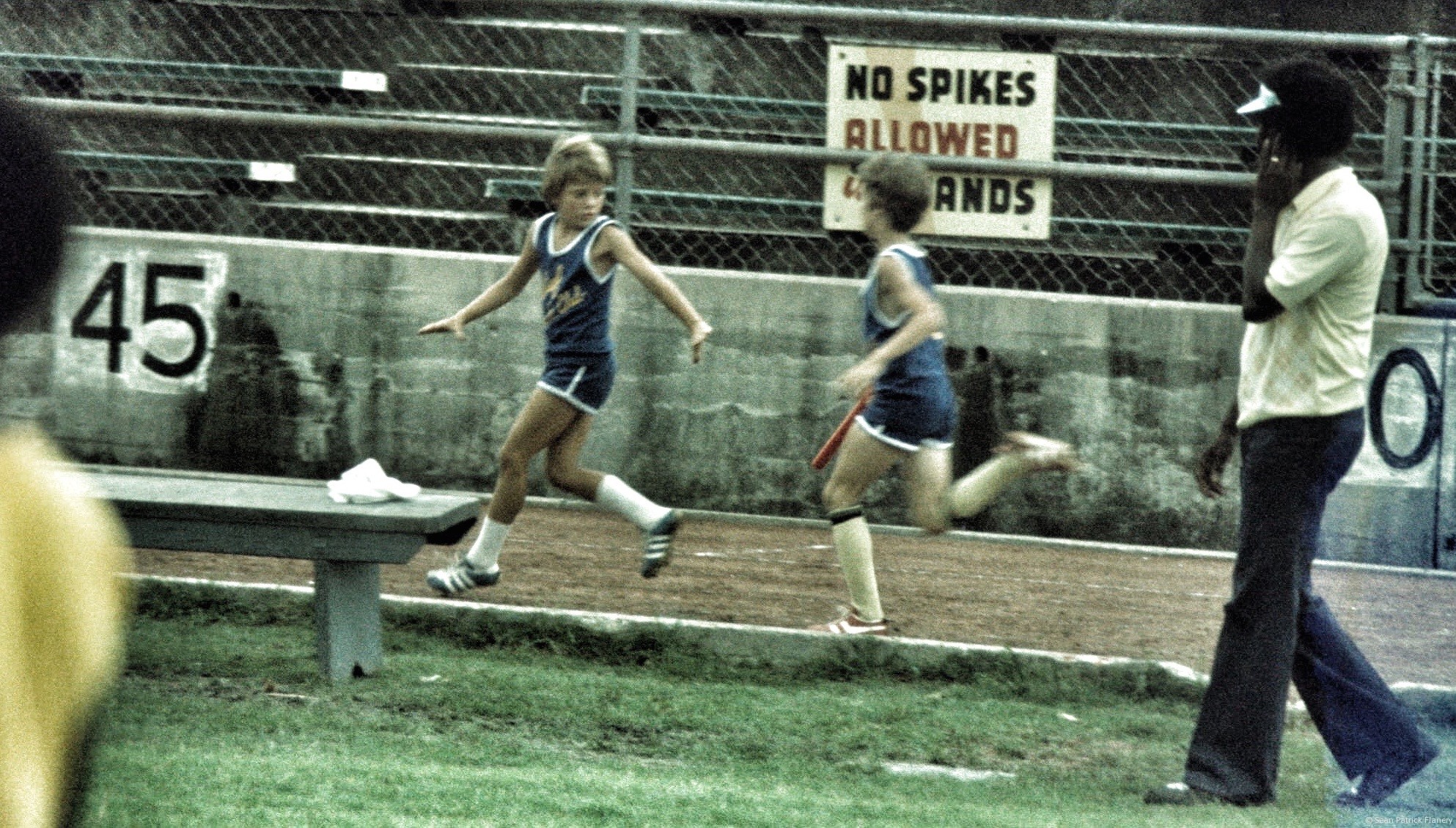 Man, I could’ve sworn I was bigger. I’ve been a smidge under 5’11” my whole adult life. But, on my mom’s 80th birthday, at 8:35am on a cold Sunday this past January 7th… I couldn’t find 5’9”. Hell, maybe I’ve just been trying to out reach my nature this whole time. Wouldn’t surprise me. I’ve done it my whole life… tried to swing above my weight class. Not because I could… but because someone made me believe I could. I mean REALLY believe. And maybe when life’s linebackers see a believer coming their way… they lose a bit of belief in themselves. 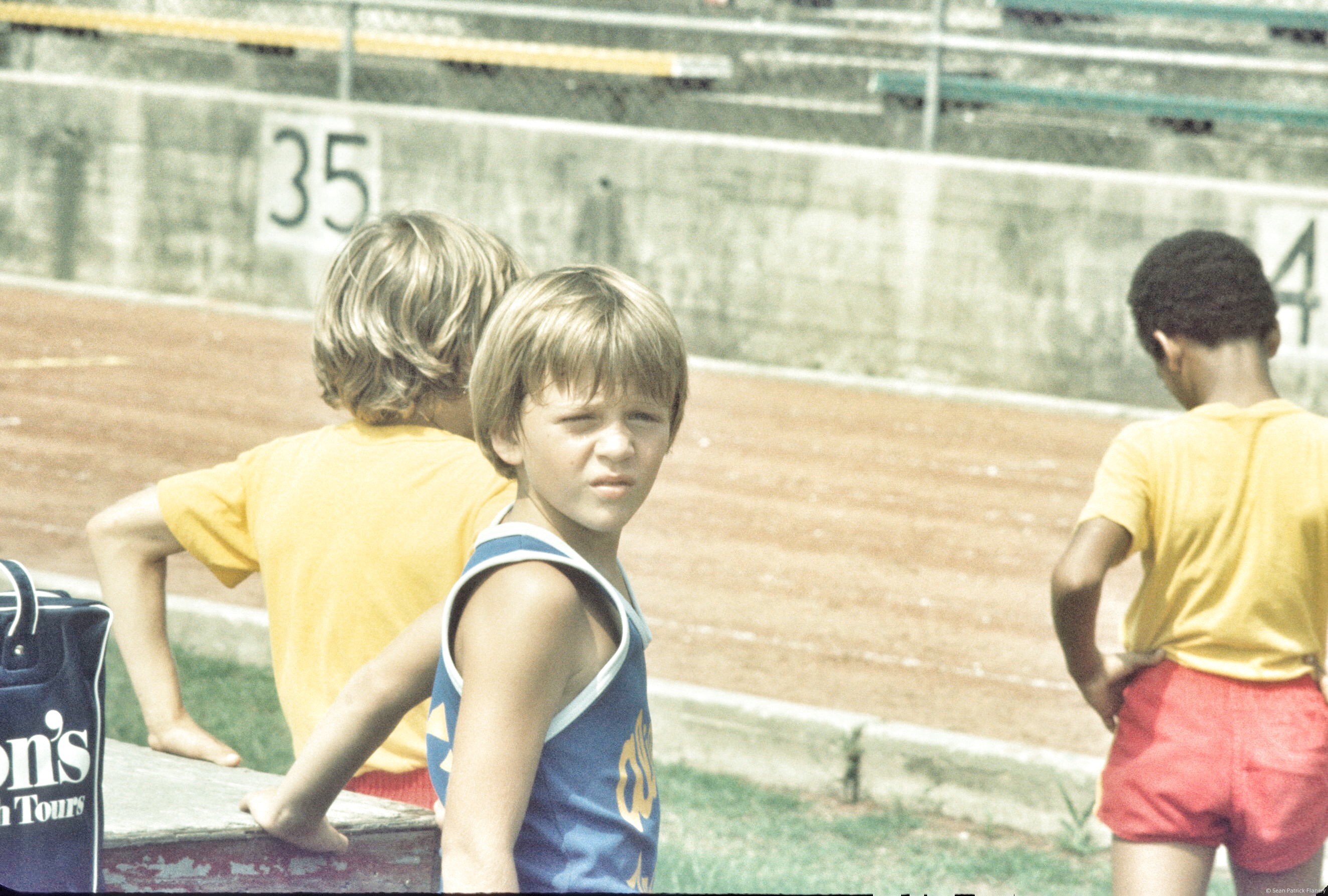 I went to the junior olympics in track when I was 9 years old for the 50 yd. dash, the 100 yd. dash, and to anchor the 4X100 relay… got recruited into the Alief Track Club after that same someone saw me on the football field running from a pack of chasers and noted that my “from” was exceptionally faster than their “to”. I always knew I was “locally” fast, but certainly not on the national level. I remember the endless qualifying rounds & heats that spread over a month, and just being happy to be there. 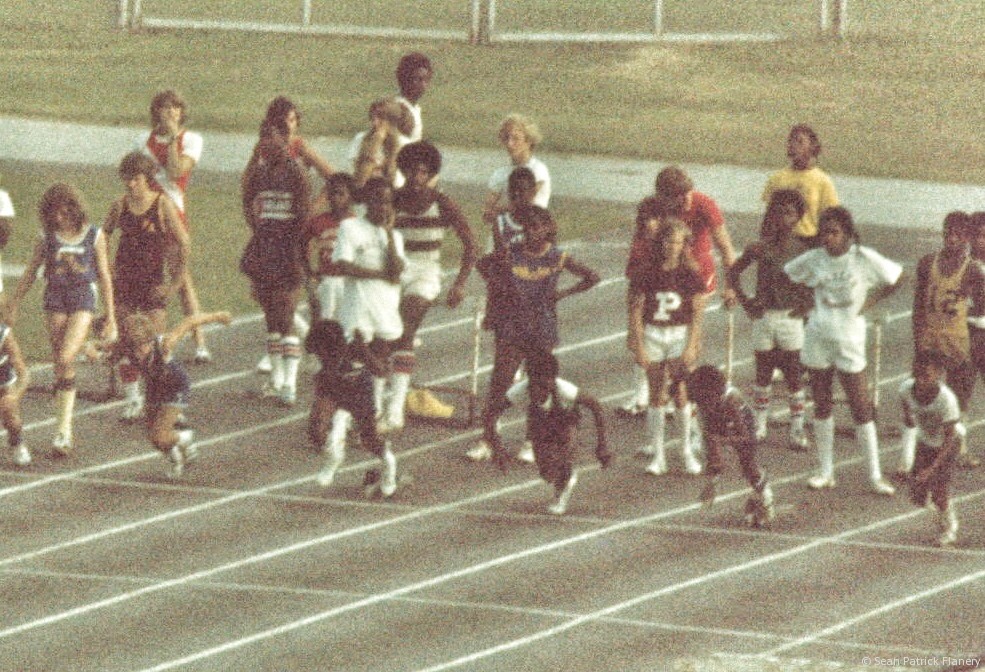 I knew there were faster heats where the REALLY fast kids were. But my “knew” was wrong. The only thing those heats did was weed out the trailers… and when the list of 8 names was posted of those that qualified for the finals in JK Butler stadium… mine was printed right at the bottom. That can’t be right. There was about .3 of a second spread from first to me on the qualifying sheet… and I knew that .3 was a lifetime in a sprint, but holy God… I was in the finals of the junior olympics. 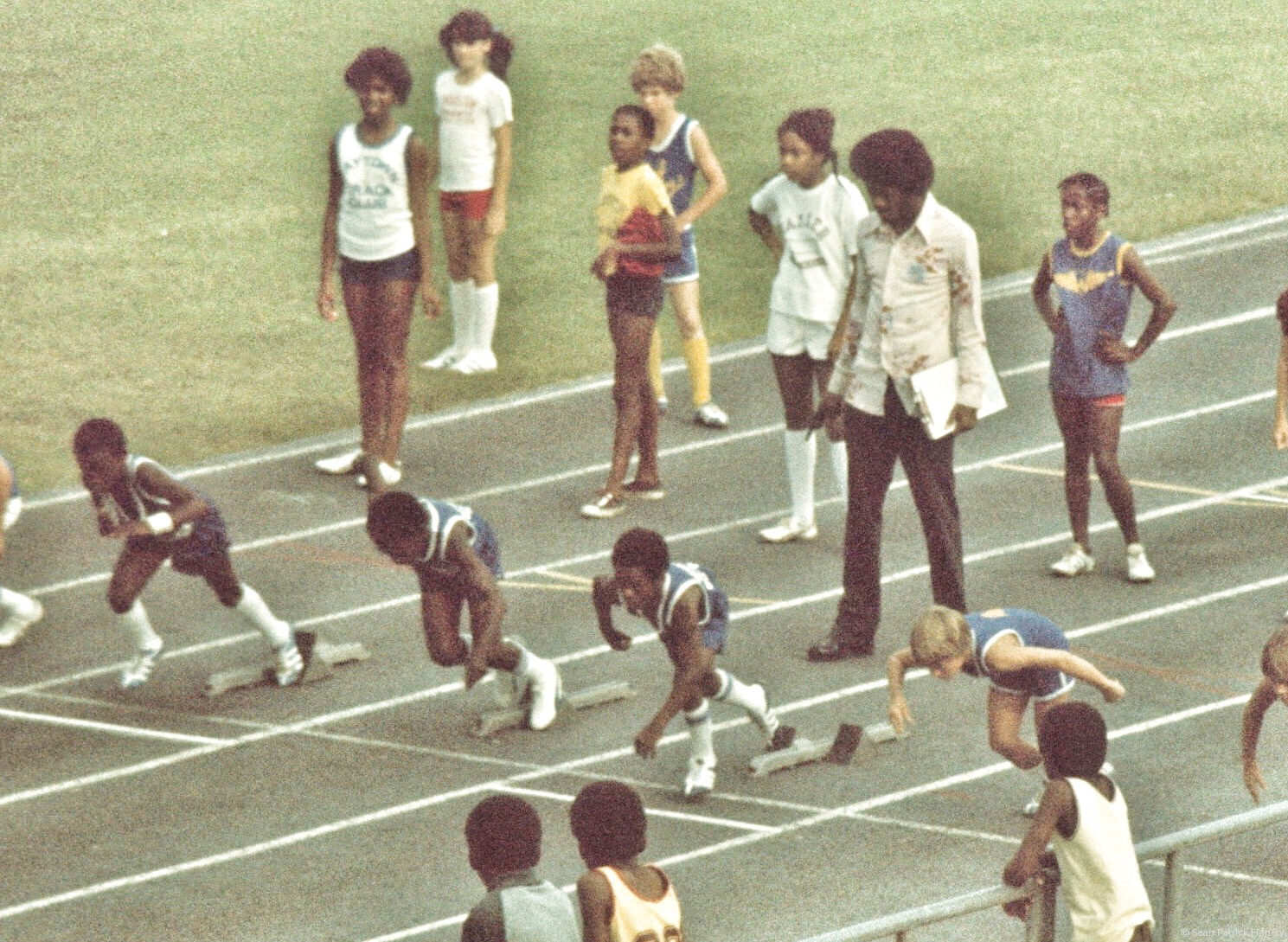 I remember hearing a story in my ear on the starting line about the pain that comes in the final 20 yards, and that if I could push them hard enough, well those other 7 punks would turn towards comfort in tough times… but someone special, someone the voice knew & loved, would run even faster… straight into the storm… to get the good shit. I knew that was all fine & dandy, but I’d need something else entirely to find .3 of a second. You know, my name sounded different on those stadium speakers… like an echo. Like each speaker received the call to action just a millisecond after the previous… all the way around the stadium in a 440 yard loop… right back to the starting line where a teaspoon full of honey was held in front of me by the strongest hand I knew… a teaspoon that I was told contained all the extra energy I needed. I looked up to see if it was true… and saw a nod and a smile that knew in it’s core that I would be the fastest little shit on Earth that day. Holy hell, it must be true. I remember looking around to see if any of the other kids had honey. Nope. Not a one. I believed… because someone else that would never lie to me believed. And, turns out it WAS true. You know, I didn’t think the national anthem would ever sound better than it did after those races…. almost like it was written for me… stood on that giant podium 3 times that day. Hell, it was almost as tall as I was… but I’m not afraid of those heights. 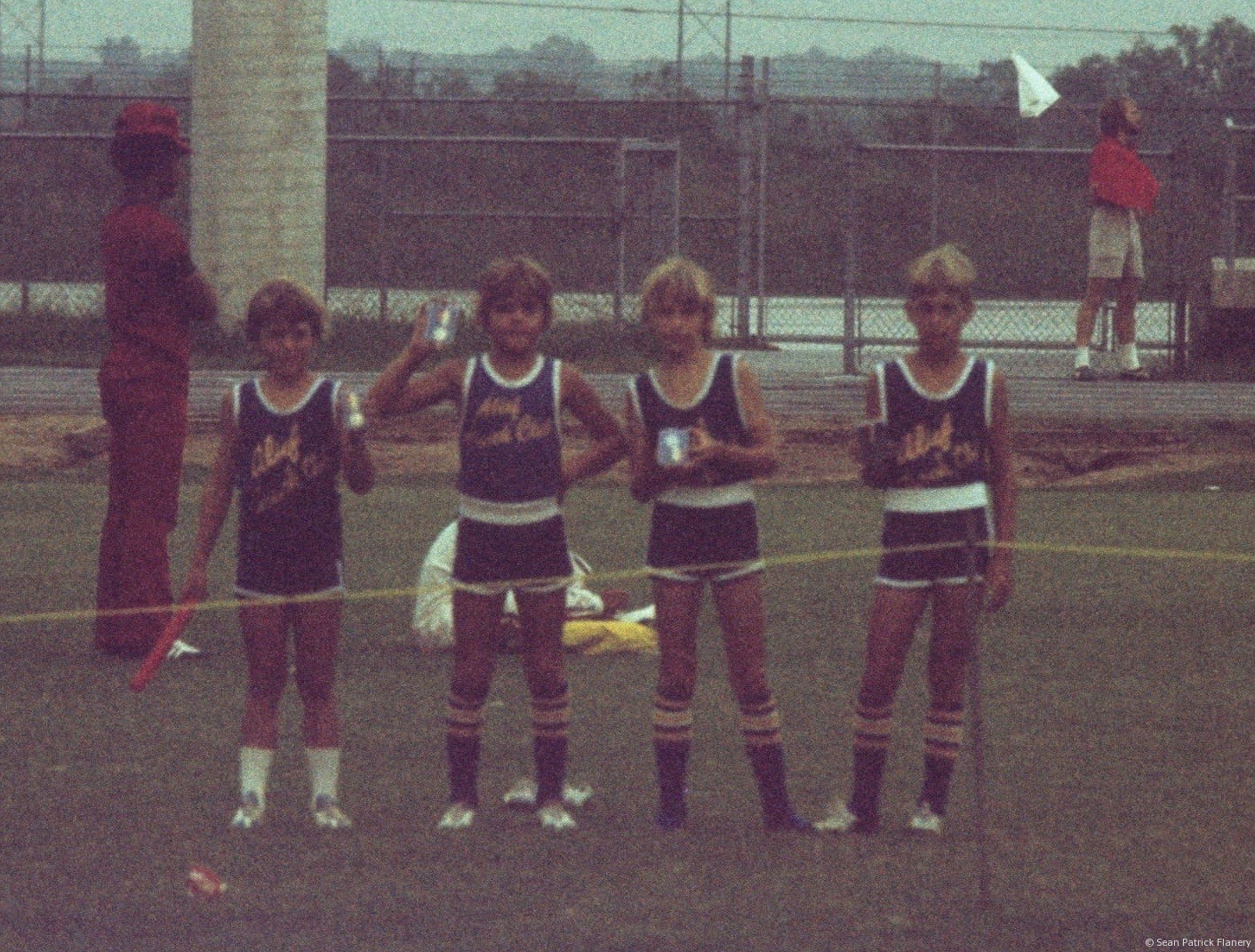 4X100… Indeed, they were caught on the back straight.

An entire generation later I found myself discussing goals with a 5 year old swimmer who couldn’t complete a single length of the pool on the night before his first day on his local swim team. 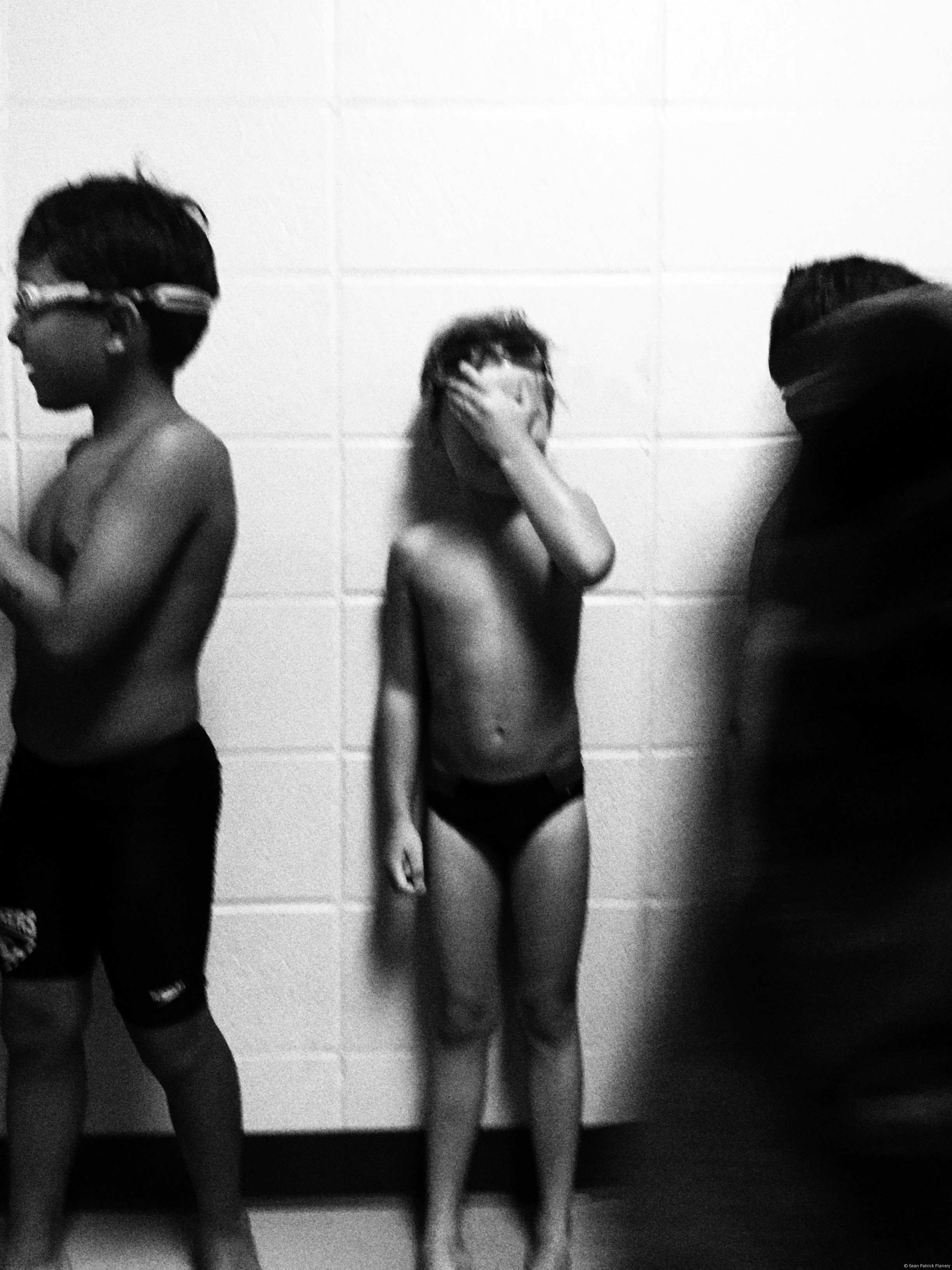 We outlined the necessary routes to achieve our goal; our goal of not grabbing the ropes or stopping before getting to the wall… and we proceeded to crush that goal within a week. 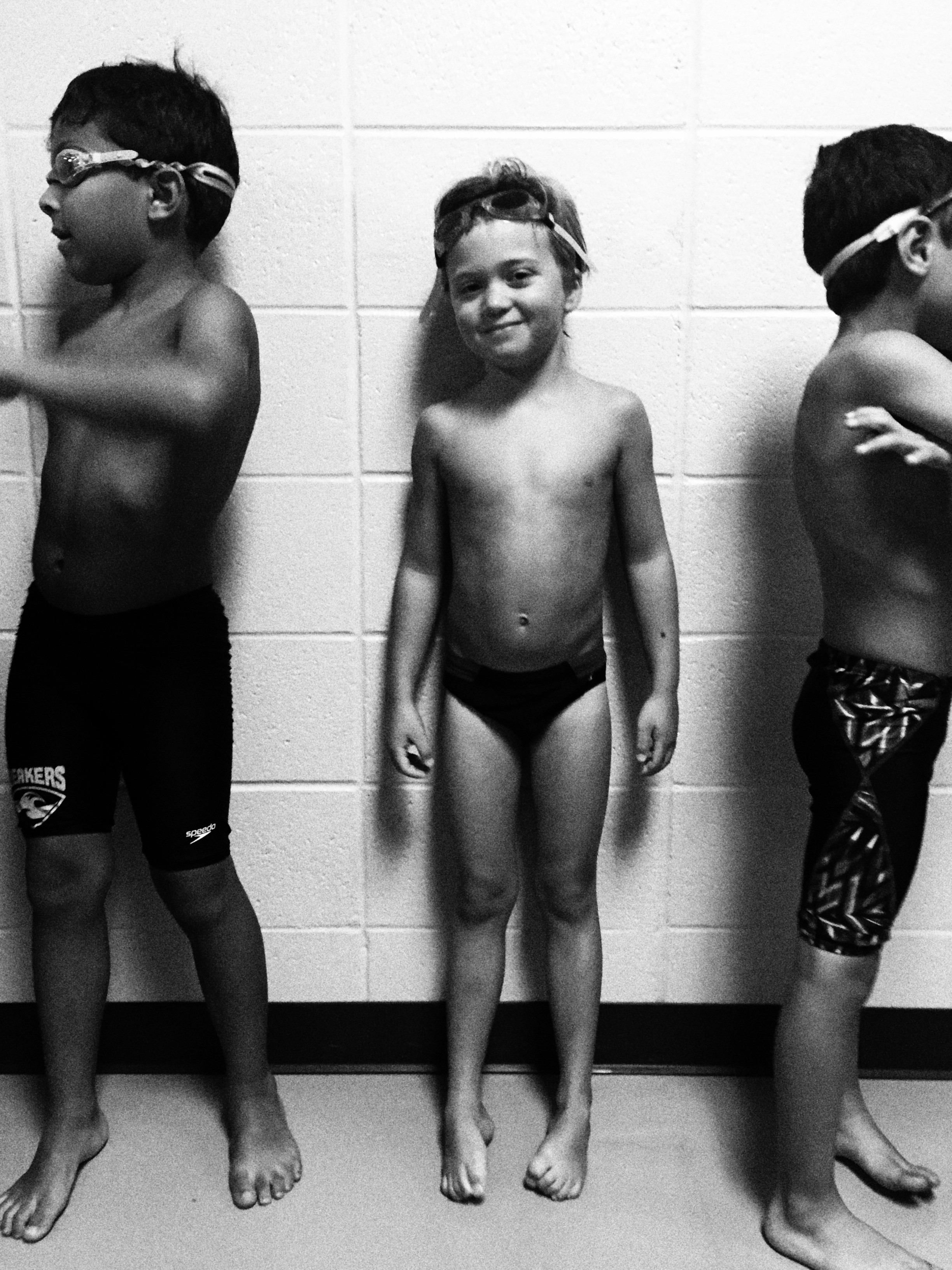 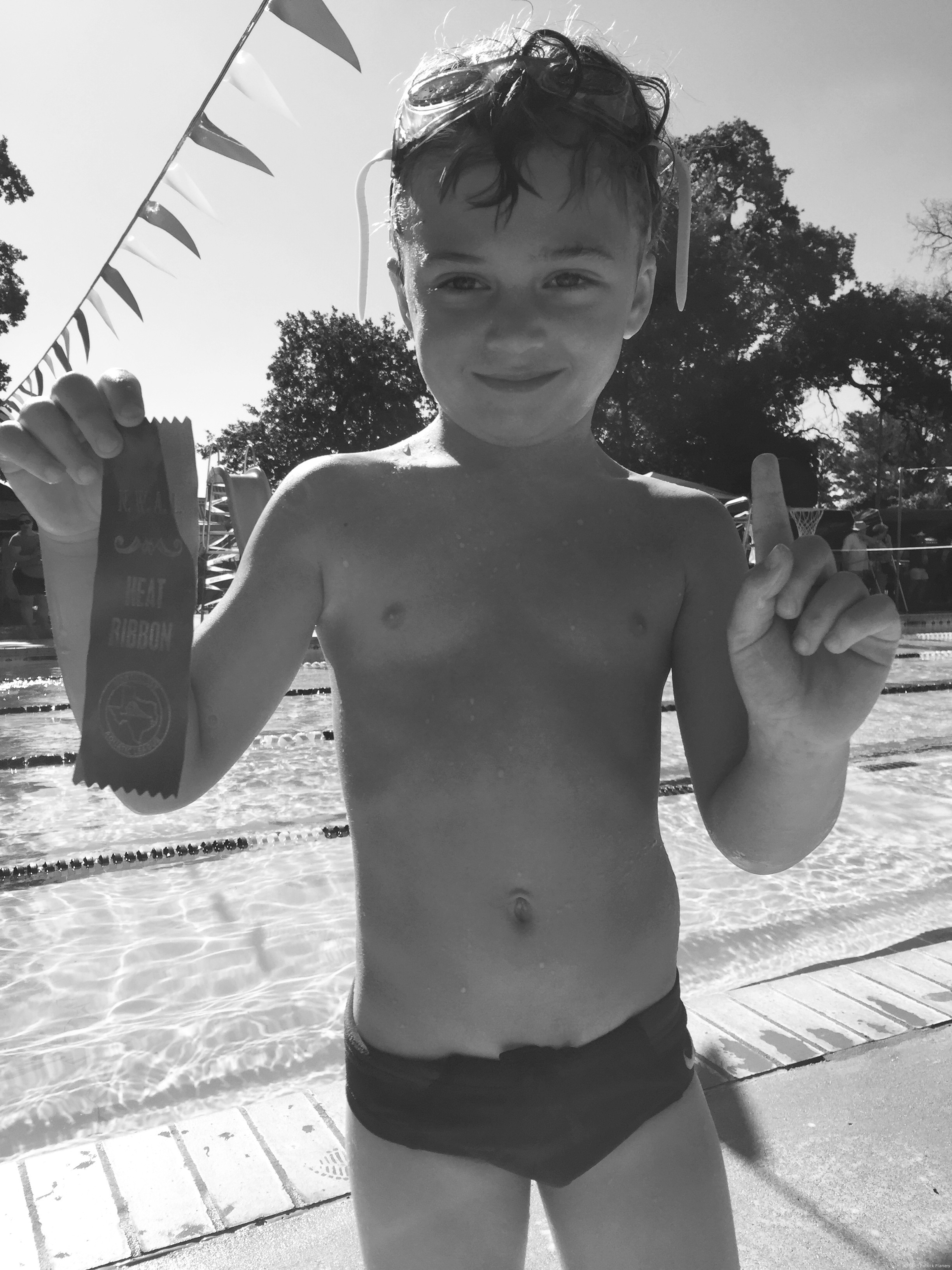 Then, he decided he wanted a gold medal. So, I inquired. Turns out they only give out medals after the regular season… to the very best of the best… those who not only qualify for the prestigious invitationals… but win. 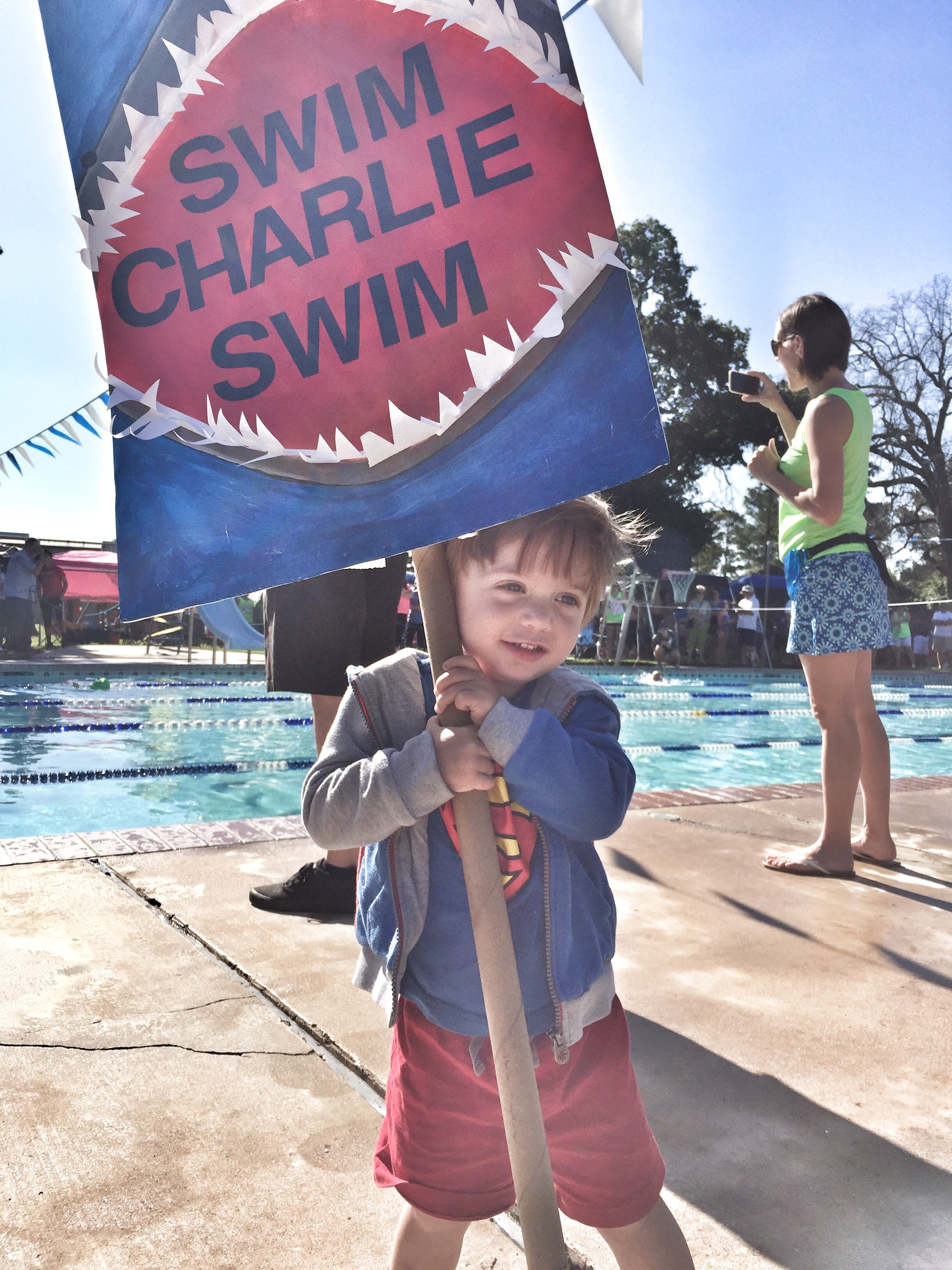 So, a very difficult and highly improbable goal was set… but I’ve never forgotten that voice that believed in me that day at JK Butler stadium… that voice that believed in me my whole life. That voice was always one of my absolute favorites. So, I tried to find mine… and I told him. I first told him about the initial 5 yards of solid blue lane rope, and that we’d dive in, but we wouldn’t take any breaths until those ropes broke into blue/white for the middle portion of the pool… and we would paddle… hard… straight for the pain. Then, I told him about the end… that when we reached the final solid blue portion for the last 5 yards before the wall… we’d laugh at the discomfort and seek out and find an additional, even higher gear no matter how much it hurt… we’d keep our head down with no breaths, and drive for that wall… just daring the weak to keep up. 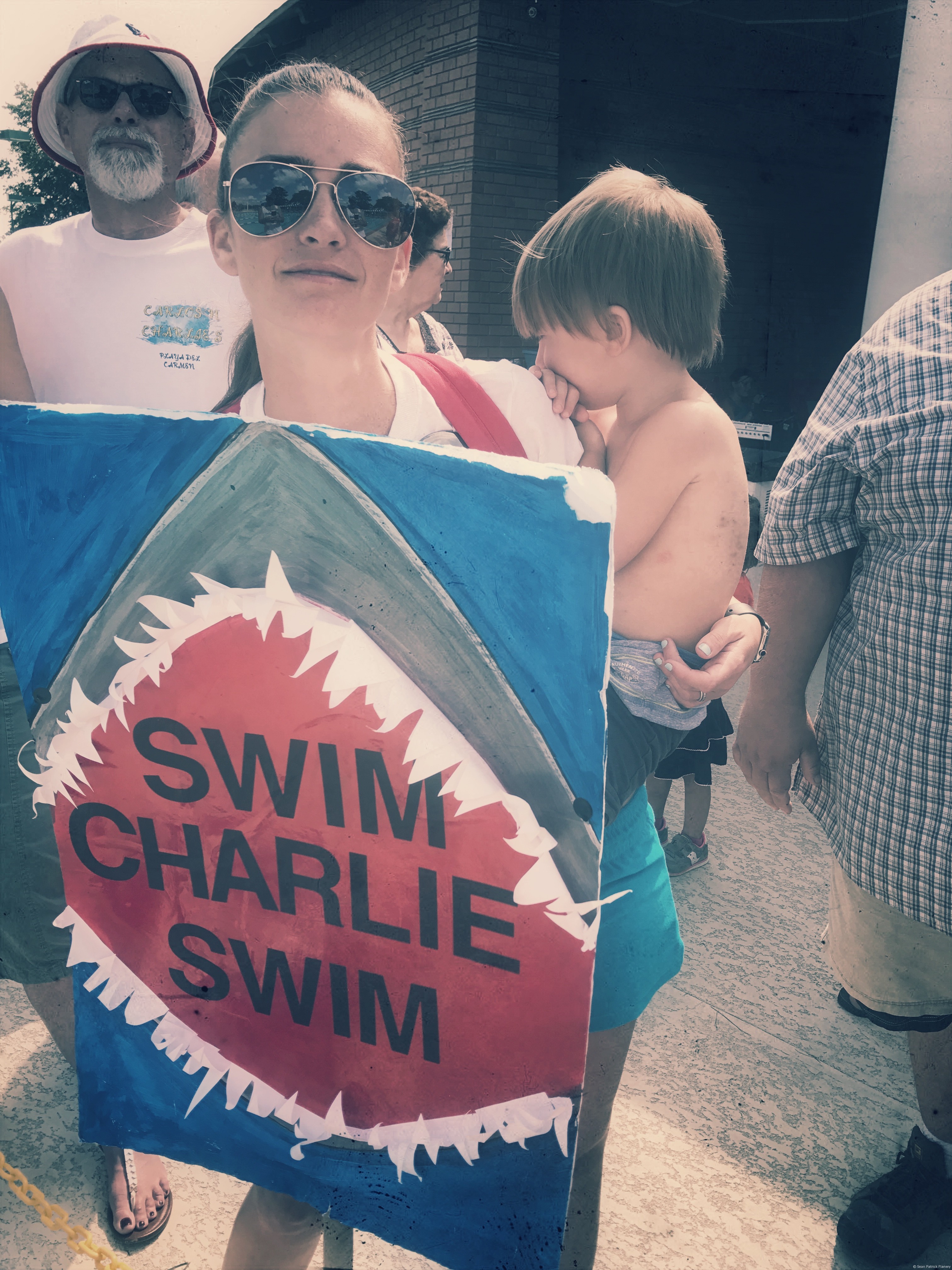 And, even if HE didn’t believe in him, well, there was always that magic teaspoon of honey right before the horn that he DID believe in. That teaspoon that I had believed in. 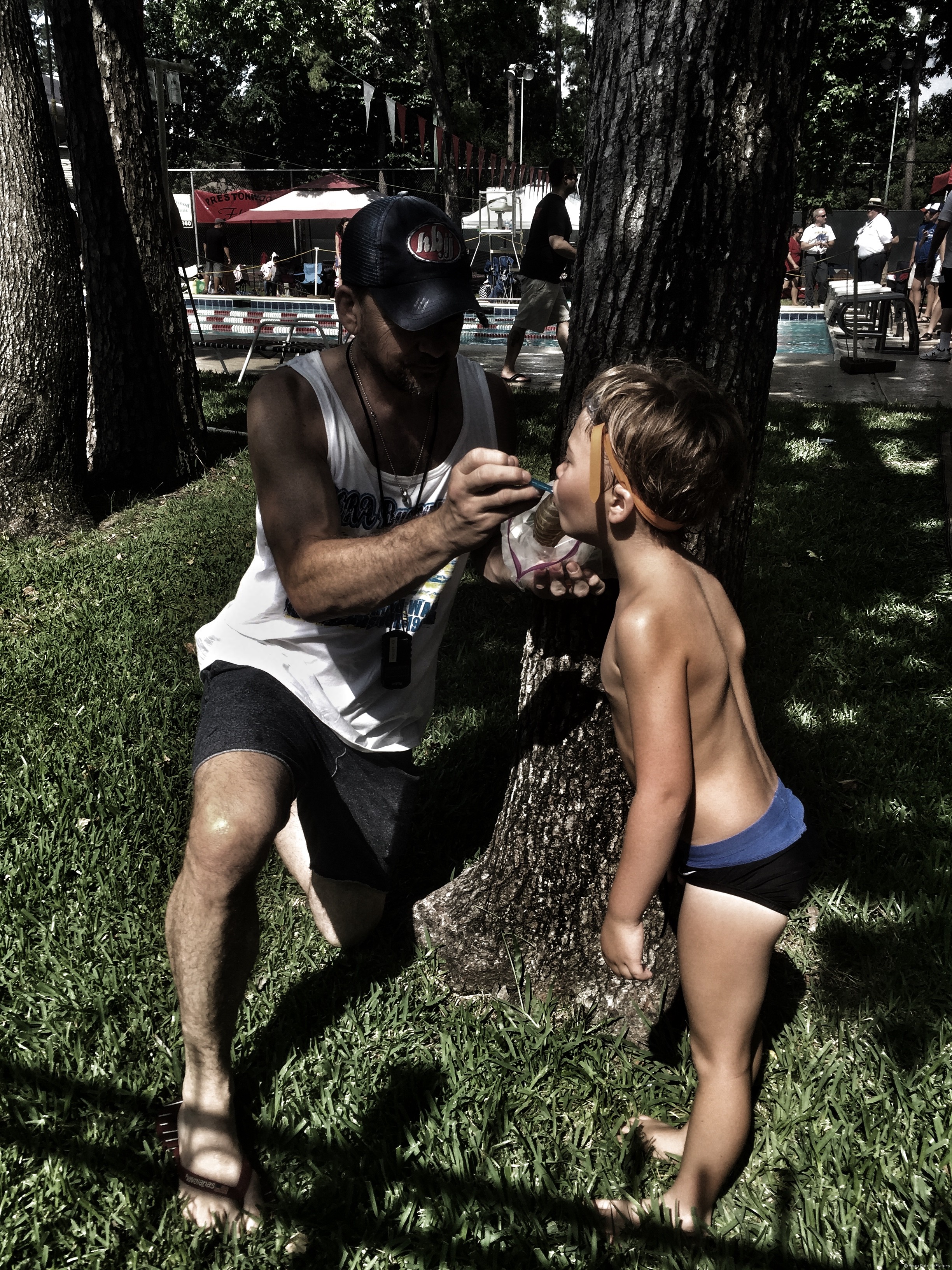 His times steadily dropped meet by meet until he finally qualified for the much heralded Red, White, and Blue Invitationals on his last meet. It’s funny, in that big-time indoor pool he was the only kid on a starting block that wasn’t wearing a deadly serious swim cap… and hell, those that were quietly confident & nonchalant were always the kids I was afraid of. 7 swimmers shaking their arms out and staring with a Michael Phelps focus down their lane looking for home… but just one scanning the crowd looking for his… and he found it with a wave. 8 little paddlers screamed across the pool that day this past summer in a perfect dead heat all the way up to that final 5 yards with the solid blue rope. But, only one head never popped up for that glorious lungful of air in that final blue. Just one. THE one. 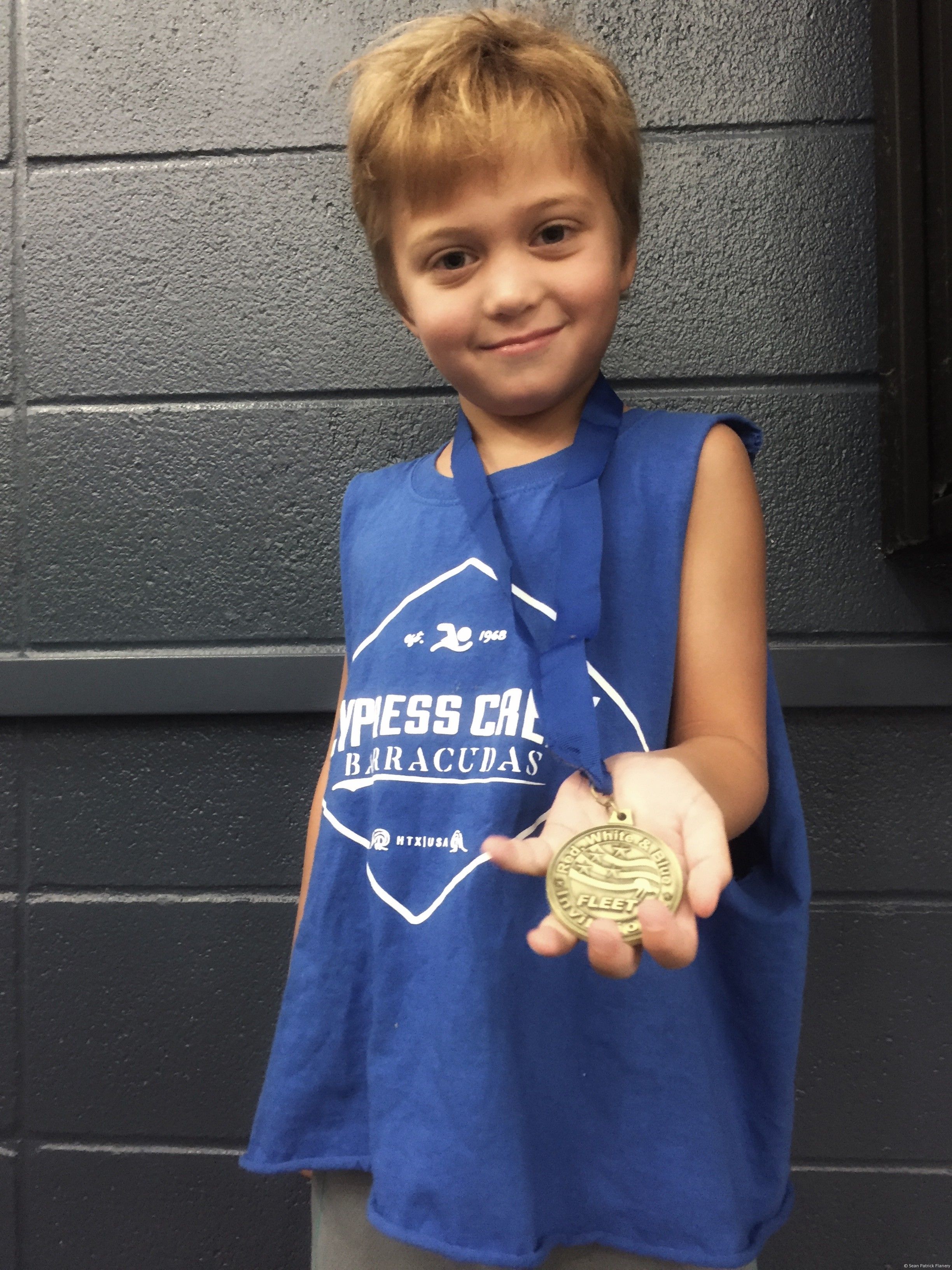 My God, I’d be lying if I told you that I kept it together watching that. And I’ve watched that video hundreds of times seeing a 3rd generation game plan implemented, executed & realized to perfection by someone I knew & loved… because of belief… a belief that was handed down to someone looking back to make sure he had a firm grip… a belief in something that he’ll someday realize has nothing to do with who he is. 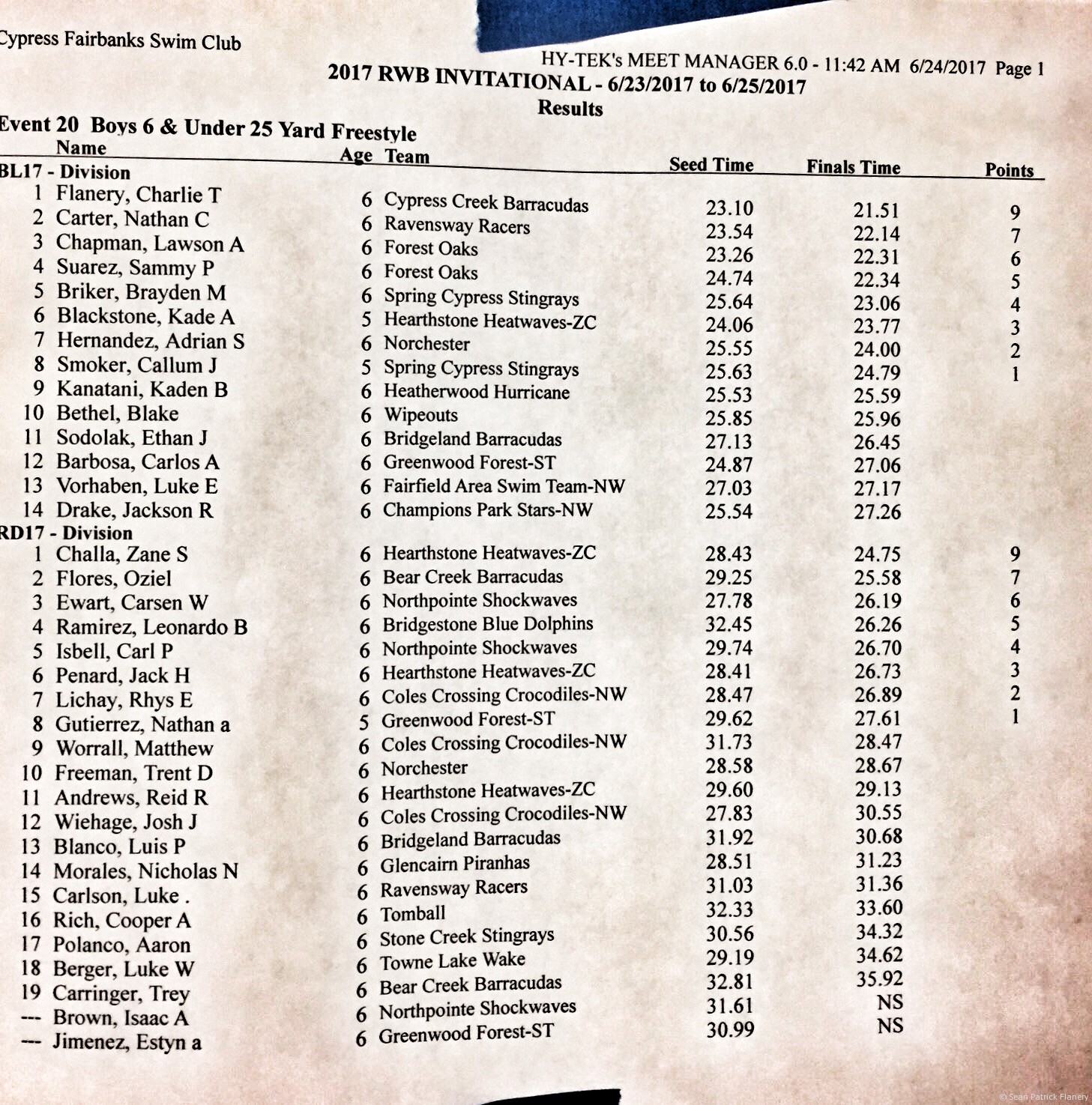 But, by then it’ll be too late. He’ll be so used to successfully swinging above his weight class that he won’t miss or need that honey, and that weight class will be like his own back yard… where he’ll plant whatever the fuck he chooses… and where I’ll now plant a tree. One that I think we’ll call Grandaddy… after his own. 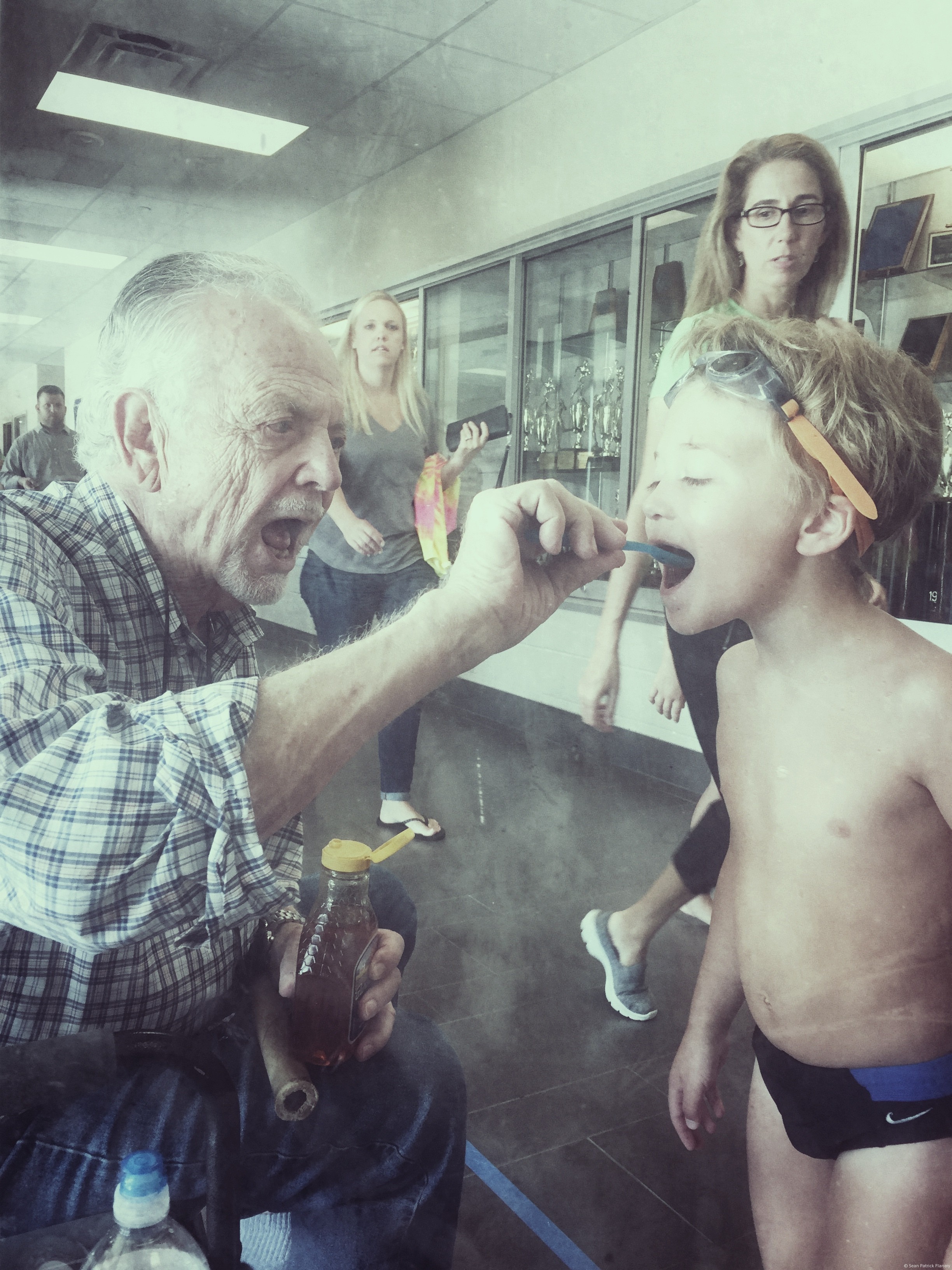 I think the podiums get taller with each generation. So much so that a fall looks like it would break a leg. But hell, he’s not afraid of those heights… and neither is the Kid he has in his balls… one that’ll hopefully someday look at a once again 5’11” man… and call him Grandaddy. 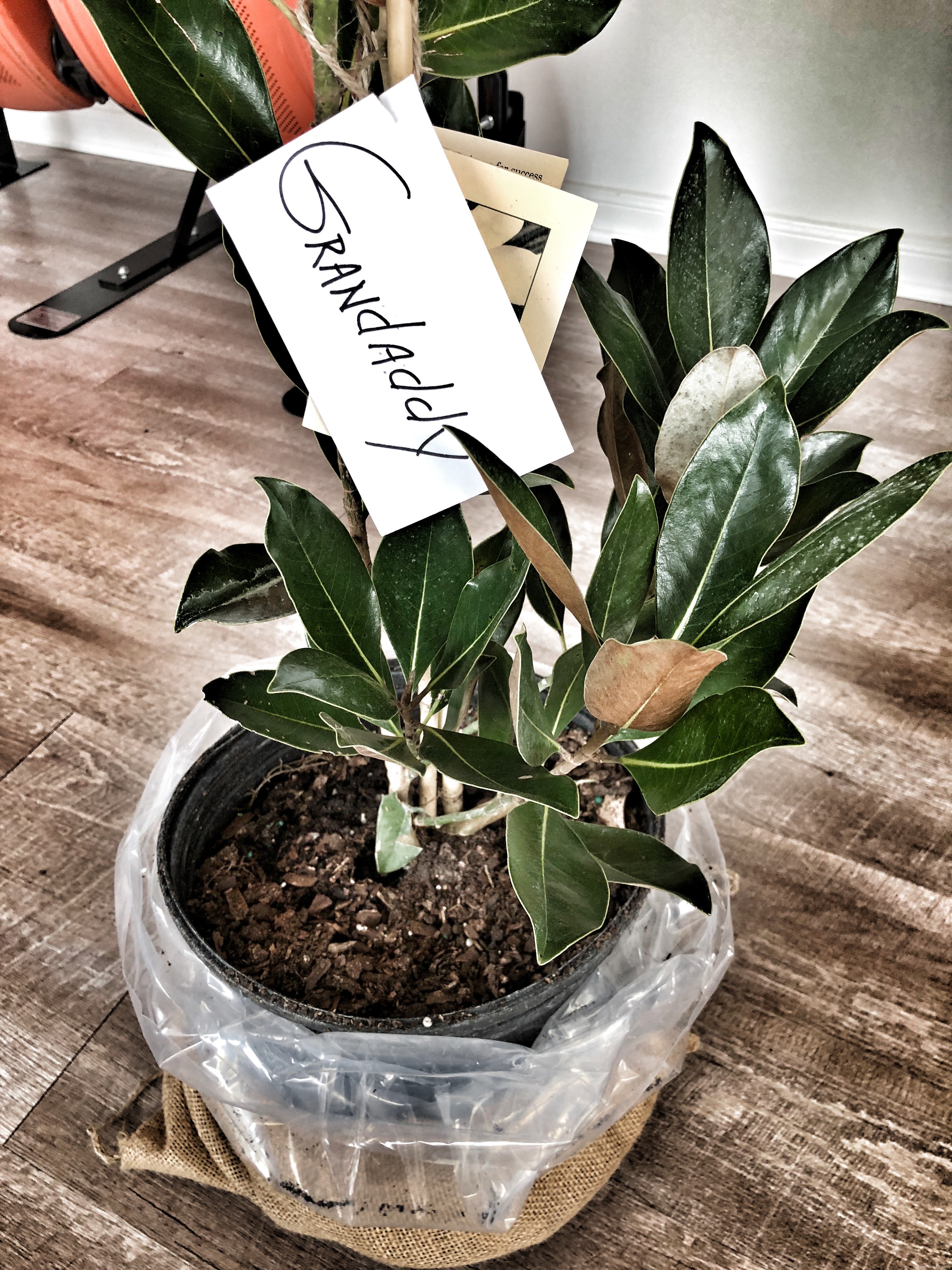 You know… some men are petrified of someday turning into their dads, and others just dream… of someday… doing just that. 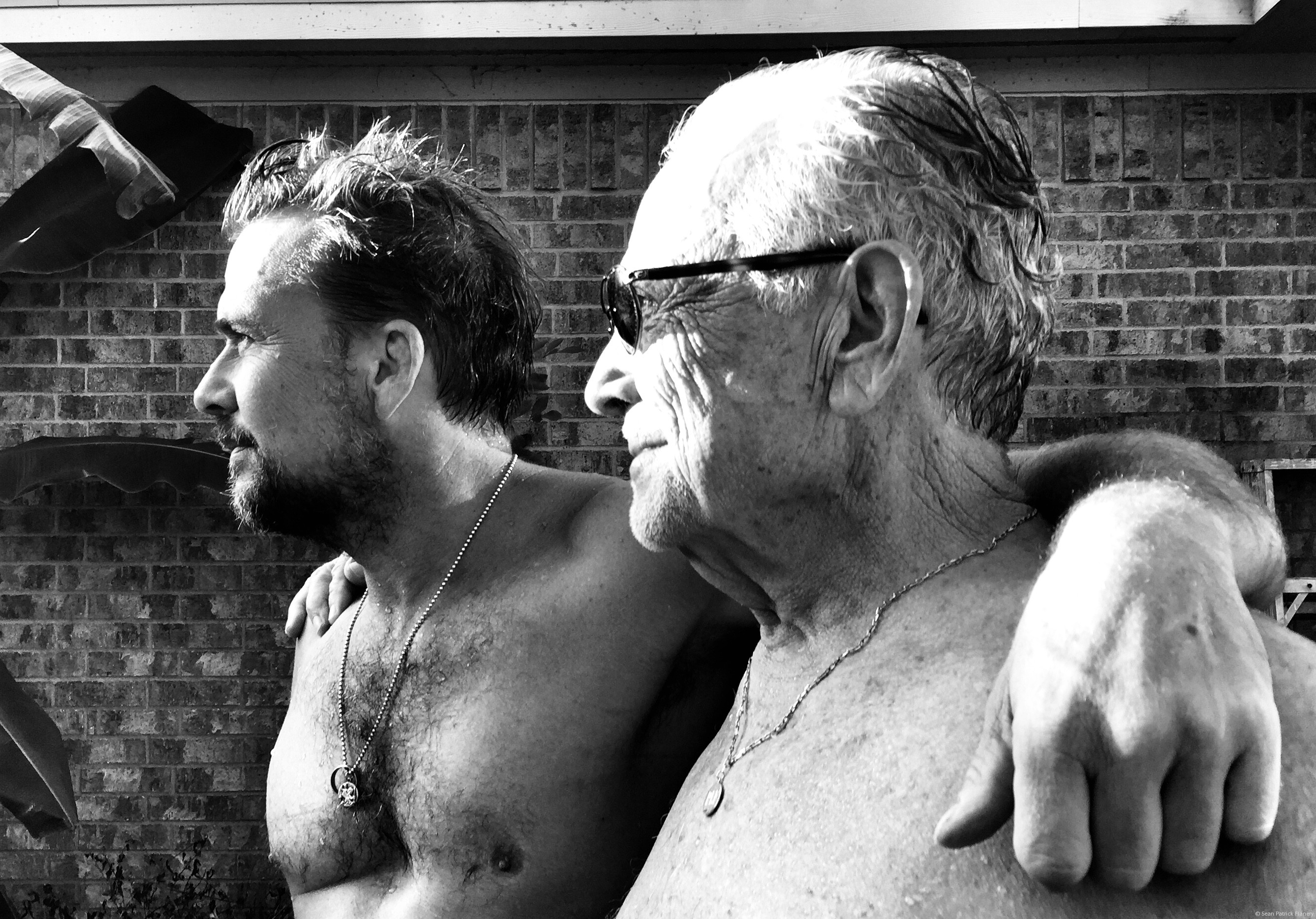