I Have Norman Reedus Locked In My Bathroom. Part 2 -Sean Patrick Flanery

Norman Reedus Is Gone. Pt. 2 (for part one click HERE)

Okay, so at this point, I’d shed ALMOST everything and was now headboard hyper-lounging… but I can hear the “Stein’s” breathing getting quicker and quicker, and I knew he was approaching panic.

Reedenstein:  “Oh shit, he just kicked his boots off, dropped his jeans right outside the door… and then put the fucking boots BACK on and just walked off into the room again.  PLEASE hurry man, the dood’s just waiting to do do some sick, perverted shit to me… and he’s out there doing his “waiting” in nothing but those fucking boots!!

I let out a SUPER loud snort just trying to hold all my hysteria inside.

But even that “nothing” came out in the octave of a pre-pubescent 8th grader as I was trying to keep everything contained.

Oh, sweet little baby Jesus, I’m thinking… can it really be this fucking GOLD??  And then he comes to me, as he often does when I call on him with: “Yeah, dude.  It can… and it is.  And next time come directly to me.  I know it’s difficult for you to understand, but even though she’s my Mom, she really has zero authority… dig?”  It’s him, so I have to respond… but I do so in as quiet a whisper as I can push out, with: “Yeah, little ‘sus… I dig.”

Then right back to the “Stein”, with:

“Okay, I’m hurrying. Tell me this… Can you hear anything else that might help me?”

Reedenstein:   “Fucker’s got the TV on.”

Me: “Okay, good… that’s good intel. What channel’s he watching? That’ll get me a good profile of this guy & what he’s capable of.”

I immediately start scrolling the channels until I find a Forensic Files on A&E… talking about a skull found down by a river’s edge all crusty with mud and blood and shit… and I turn that volume WAY the fuck up. Reedenstein is just silent.

Me:   “Okay, listen closely. We’ve gotta reprogram this fucker’s mindset. And if the hotel that you’re in uses AT&T U-verse or DirecTV then I can change the channel of what he’s watching to something more peaceful.”

Reedenstein: “How the fuck are you gonna do that?”

Reedenstein: “How the fuck does your app know what TV to hit? Don’t you need passwords & shit to do that?”

Dammit! The boy was THINKING… I had to react fast or blow the whole thing. And in all honesty, props go to the “Stein” for bringing up some pretty good points that I never thought he’d recognize. But, anyone who’s ever read my blog knows that a little adversity will never stand in the way of one of my rock solid objectives. You see, fucking with Reedus was already on my “to do” list, and once something is on my “to do” list… there is only one way to get it off. So, I punched my empty fist into the dark recesses of my brain and came out with a hand full of:

“Bro, you don’t watch the news do you? Between Wiki-leaks and Edward Snowden, every single password out there worth having has already been hacked, and they’re all available for purchase on an underground anonymous website called ‘Silkroad’, where you can buy absolutely anything with bit-coins, so even uncle Sammy won’t have a clue. I’m on the site now, so hang on a second while I hit send & I should have the passwords any second.”

BOOM! I knew I had him… that is, until the “Stein” throws back:

“Yeah, but even if you have the password for the hotel’s account, how can you know exactly which TV in the building to connect to your dealy majigger-thingy?”

Mother-FUCKER!!, I’m thinking to myself. Of all the times we’ve partied together, not ONCE has he ever brought the left half of his brain. But tonight, he brings them BOTH?? Son of a BITCH!

I take a deep breath and focus, then I throw a NASA grade solvent on every single one of his questions with:

“Homie, I would never bet my Reedenstein recovery abilities on a fucking 2D location platform. No way. For YOU… I went 3D. You see, a satellite only determines the polka-dots location from the sky, but triangulated cell towers give me the ELEVATION of the polka-dot. Combine that shit with Google maps, and I even have a room number, and every TV’s serial number is associated with a specific room number.”

Holy SHIT, I even blew myself away with that!!

Reedenstein: “Yeah I’m here, homie. You had me at that part about the triangles. Man, you gotta show me this shit when I’m out. That is fucking crazy that you can do all that with a fucking iphone.”

Me: “Yeah, Steve was the man! Now give me a second while I plug in these passwords.”

Whew! That was a close one. Now at this point I’m all in, and am gonna need some rations, cause this is gonna be a long night. So, I scour the mini-bar & basically dump it’s entire contents out on the bed. 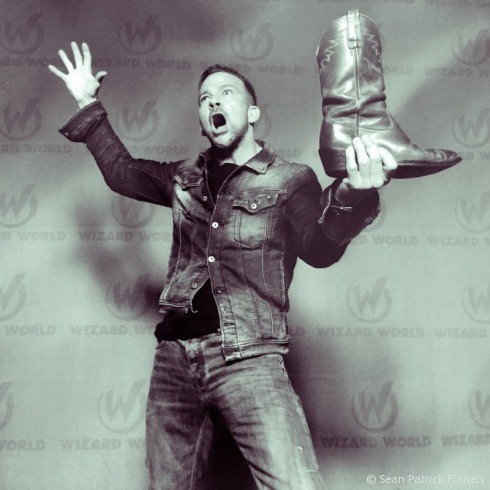 Reedenstein:   “Oh shit, creepy boots is pissed!! Sounds like he just destroyed a buncha shit! Big crash! Should I bolt?”

Me: “Too risky, hunker down. I’ll be there shortly.”

I open some peanut butter crackers, a Payday, and crack a Gatorade & get ready for what is most certainly going to be fucking HOURS of entertainment. I plop back down on the bed with the TV’s remote in my hand and try to imagine just what the “Stein’s” tiny pupil looks like through that itty bitty sliver of space under the bathroom door as it’s mashed down against the cold floor trying to peek out… but more importantly, I try to imagine how he’s going to react when he realizes that he only has 30 minutes of consciousness left.  Oh man, this is gonna get GOOD!

BUT, my plane is about to land in Columbus for yet another Wizard World event with the “Stein”, where I’m sure I’ll get another few stories worth cataloguing, so, I’ll have to finish this one later…

Wanna know what happens in the bathroom next?  Then please join the shine by subscribing to my blog, ShineUntilTomorrow, up in the top right >> … and then buckle up my little skillets, because it’s about to get GOOD!

Stay tuned for the exciting conclusion of “The Sometimes Justifiably Unbelievable Adventures Of Flanenbaum & Reedenstein”.

And remember, your thoughts are always welcome in the comments section.