If you haven’t already, please start at PART ONE by clicking HERE.

At this point, I can sense that the “Stein” is starting to panic, and I knew I’d have to extricate my little homie from the turlit pretty quickly to prevent any longterm psychiatric damage.  I desperately wanted to respond to him as quickly as possible about them damn RedBulls, but my freestylin’ session was being interrupted as my whole body was now convulsing like a thousand fingers massage bed that’d had a ‘Powder’ level power surge. 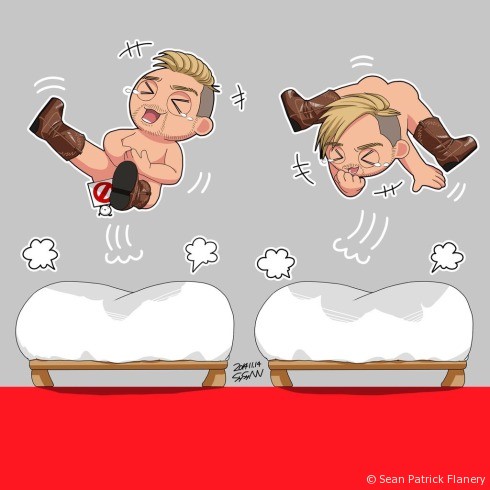 Reedenstein: “Dood, are you there?”

I squeak out a meager attempt at reassurance between convulsions, with:

I immediately hit the mute button on my phone and bury my entire face in a pillow because absolutely ZERO mortals have EVER been able to contain this level of hilarity in silence. I take three deep, long, focusing breaths, the same way my Grandaddy would instruct me to do before going into battle. …Okay, calm, I’ve gotta rally my brain cells and think quick…so I hit him with:

“Change of plan, homie. We’re gonna have to forfeit the fingers. I just called housekeeping and ordered a rollaway bed for the room you’re in. Told those fuckers that no one was in the room and to just open the door and roll it right in ASAP. Be looking under the door so you can see when it gets there. As soon as it rolls past, ‘it will clear the hall along his route.  We will deploy that bed as an impassable barrier-a gauntlet, if you will.  He won’t have a chance.’  That’s the opportunity to bolt. So homie, you bolt like you’ve never bolted before.”

Yep, when I find myself in times of trouble, brother Clint comes to me, singing…-but there was no time to give props to Det. Callahan as the “Stein” quickly cuts me off with a delicately whispered:

“H-h-h-h-e’s standing right outside the door, homie! Serious. Just fucking standing there facing the door. I could touch those fucking boots if I wanted to.”

He was looking at those babies right where I left them… frozen and motionless, just millimeters from that bathroom door, as if the door could feel the  imaginary psycho’s breath intermittently exhaling on it’s paint.

Me: “Don’t touch them! It might be a trick. Just stay quiet, watch for the bed to come in and then BOLT! I’ll stay on the phone with you—“ 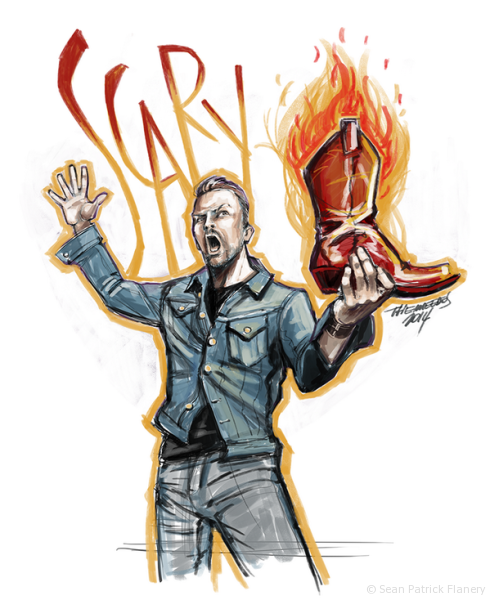 Reedenstein: “But, I need a RedBull as soon as possible! Probably two, just to be sure!”

Me: “It’s in his hands now. God willing, a couple Bulls will find you in time. But remember what Zech. says, and I bet Phil’ll back me up on this, it says: ‘In compensation for your days of banishment, I will give you back double’.”

Reedenstein: “Is that from “Bulls On Parade”?

Me: “Wait a minute… what? Oh… uh, no. That’s a different Zach. Not the one from Rage Against The Machine… the one from the bible. 9:12, I think. It just means that the ‘sus will double down if you stay true. So, if you believe, and you ask for two Bulls, little ‘sus’ll show you FOUR… ’cause the ‘sus don’t fuck around when it comes to fuckin’ around.  Just believe, holmes! BELIEVE!! …and run like the wind!! Now, shhhhhh… and wait for that bed.”

I had to hurry, as the “Stein” was now dangling on a precipice. And yeah, I know I was the dangler… but I’m also the catcher in the “Stein’s” rye. I immediately throw the mute back on, use the room phone to call housekeeping and order a rollaway as soon as possible. I jump off the bed and creep up right behind those boots that I’d left facing that bathroom door in nothing but my socks, shuffle my feet around a bit and throw out a man moan or two, then bend down and put my fists in those boots, give them a little wiggle, and walk the two “men” to the door as I hear the “Stein” starting to lose it.

I stifle an upwelling of volcanic sized cackle with a snort, toss the boots out into the hallway and walk right back to the bathroom door, throw another little moan, then go right back to freestylin’ on the bed. 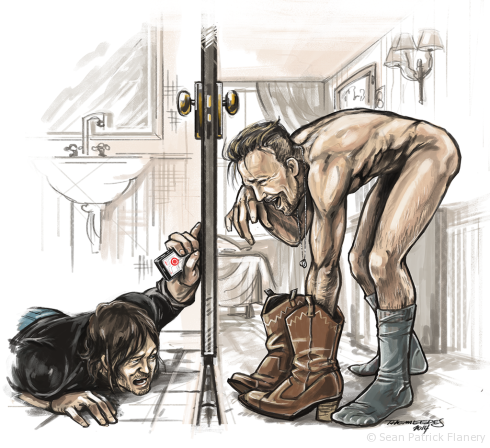 An image that is forever burned on Norman Reedus’ retina.

Reedus’ voice is ringing his disgust at his captor’s depravity as I settle in. I throw a quick prayer up for me to find a ‘Thigh Master” infomercial on TV, or something similarly dirty, but none was needed as the Dynasty was answering all… and their answers didn’t disappoint.  I snap a quick pic of Phil’s daughter-in-law, Korie Robertson, who was in a VERY bizarre looking yoga position on the TV, and use my TextPlus app to send the pic to Rocco, who was staying directly across the hall… along with a message that reads:

I WANT YOU ROCCO.  I WANT YOU NOW! I’VE SEEN YOUR FACE BEFORE MY FRIEND. BUT I DON’T KNOW IF YOU KNOW WHO I AM. I WAS THERE AND SAW WHAT YOU DID. I SAW IT WITH MY OWN TWO EYES. AND I’VE WANTED YOU EVER SINCE THEN… WHEN YOU BLEW UP THAT DRUGGIE WHORE’S CAT! MEET ME AT THE BAR RIGHT NOW. ORDER ME 4 DELICIOUSLY CHILLY REDBULLS AND I WILL FULFILL ALL YOUR DREAMS. OH, AND BE WEARING THE BOOTS IN THE HALL. OH ROCCO, I’VE BEEN WAITING FOR THIS MOMENT ALL MY LIFE, HOLD ON.

And no, that’s not my typo, that’s exactly what Rocco sent… and I knew he’d be at the bar with 4 ice cold RedBulls in mere fucking NANOSECONDS.

Will Norman Reedus safely evacuate the lavatory?  Will David Della Rocco procure Norman’s life remedying RedBulls?  Stay tuned for the answers to life’s most complicated questions… by subscribing to ShineUntilTomorrow at the top right.  Part 5 is coming soon!!

Thank you to @sysy_nn and @themeedes for the artwork!!  More to come.  And your thoughts are always welcome in the comments section!

As always, thanks for listening… and God bless.