Norman Reedus will not die in a lonely bathroom. Pt 3 -Sean Patrick Flanery

Disclaimer:  No Norman Reedus’ were harmed in the unfolding of this glorious plot.  Norman Reedus is my homeboy… and this is just what homeboys do. 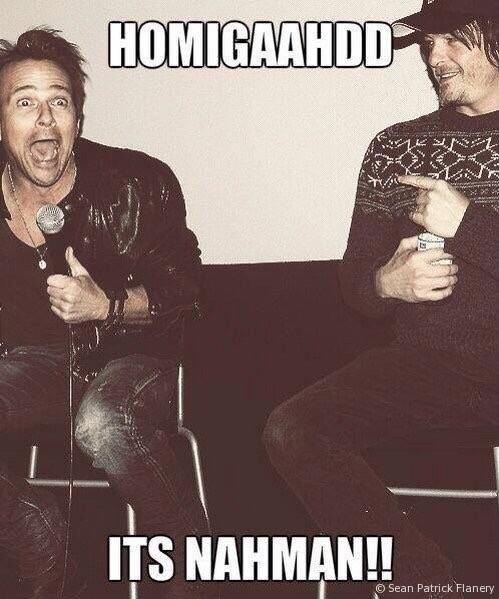 So where were we?  Oh yeah, we’re at a Wizard World event in Nashville, TN… and the “Stein” is almost hyperventilating in my bathroom waiting patiently for me to come save him, while I’m doing absolutely nothing… completely sprawled out & free styling on the bed as I say the following to him on the phone, with full commitment, as if the academy would be voting on my performance:

“Just stay with me, brother!  I’m coming, but in the meantime, lemme get connected to his damn TV.  Any second now.  Hang on, hang on, gimme a sec… and BOOM.  Got it.  Okay, the passwords are in for the hotel’s DirecTV account, I’ve got my app open & I’m all plugged in… just searching for the TV that’s cross referenced with the location that your FIND-A-FRIEND is giving me… any moment… any moment… and I’M IN!!.”

Reedenstein: “Goddam dude, I swear to God, you are fucking Kojack!!”

Reedenstein:   “Yeah, you’re prolly right. Fuck him. I heard that Higgin’s was the brains anyway. Hey, remember that fucker’s doberman’s? Zeus and Apollo? And T.C. with that tiny little chopper that he just fucking RAGED all over Hawaii with, like he fucking owned it. Yeah, fuck Magnum! I’m sorry, bro… I wouldn’a called him. Hey, are you close?”

Me: “My polka dot’s getting closer and closer. Hang tight & let’s reprogram this fucker. Tell me if you hear the channels changing.”

So, I hit the up button, and start climbing the channels.

Reedenstein: “Holy fuck, it’s working! I can hear the channels changing-WAIT!! Can you go back? I just heard Duck Dynasty! Fuck, Phil kicks ass! Have you ever met him, bro?”

Reedenstein: “How long you think it took him to grow that beard, man? OH SHIT, he’s in full Pastor-mode! I can hear it. Phil’s doling out some scripture! I knew I could count on Phil!!

Me: “Okay, you gotta listen to me now. Here’s the plan. I’m gonna turn the volume up on the TV so loud that security will come up there and tell him to turn it down. When you hear the knock on the door…bolt!!! BUT… it might take a while for a complaint to go through, so, in the meantime… let’s order you some room service.   I’m downstairs right now, but I can’t get to the floor that my FIND-A-FRIEND is indicating without a room key.  Door guy’s down here by the elevators like he’s fancy club regulatin’ and my boots ain’t dress code ready—I MEAN MY SNEAKERS… yeah, my sneakers.  Anyway, let’s at least get you fed. You want some chicken fingers?”

Reedenstein: “Yeah, with BBQ sauce. And a Coke.”

Me: “Alright, it’s on the way. Scary Boots won’t even hear the door with the volume up so loud & I’ll tell room service to just open the door and set it right inside and leave. When you see the tray dropped off from under the door crack… reach out and pull it in as fast as you can and then lock the door again immediately! But hopefully Phil can talk this fucker off the killing ledge.”

Holy shit!, even I didn’t know what that meant.

Now, at this point even I started to drift while I was waiting for the room service & we just chatted about nonsense… chicks… motorcycles… business… chicks again… it always comes back to chicks. That is, until I saw the Skittles and M&M’s sitting there.

Throughout the entire conversation after that sight, I carefully made a tiny incision with the blade of my Leatherman right in the middle of that bag of M&M’s. Then, I gently squeezed a single Skittle inside the bag, and placed a tiny sliver of Scotch tape on the incision. I never even scrubbed up… but my operation was now complete. I tip-toed over to the door, and placed the edge of the bag of M&M’s just underneath the closest side, so if he looked underneath again… he’d see it. Then, I climbed back on the bed, threw a bag of Famous Amos chocolate chips against the wall that faced the bathroom door, and waited.

Reedenstein: “I just heard something smash! Hang on a second, I gotta look under & see what happened.”

I left the relaxing headboard and crouched my head down by the foot of the bed to peer around to the bathroom door, and sure enough… the bag of M&M’s was yanked under the door and out of my sight. I waited.

Reedenstein: “I think the guy just IED’d his mini-bar! But, I scavenged a bag of M&M’s that landed just outside the door. I’m gonna hors d’oeuvre on this shit before my fingers get here. Fuck this guy. He can make due on the Pringles for all I care.”

And there was that feeling again, the one I get during all of life’s extremes. 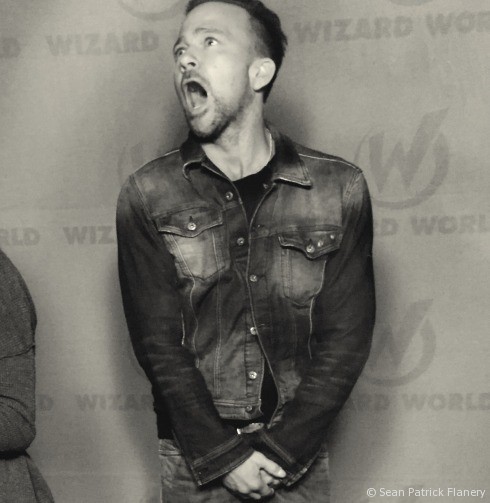 The Message Board. -God

My GOD, my BALLS are even starting to tingle, I’m thinking, as I stifled the kind of explosive laughter that usually breaks blood vessels & gives little homies hernias. “Of course they are, my son. That’s by design” came immediately and instantaneously, as something always does when I inadvertently address him. “That’s where I put my message board to you, right by your legacy… so you’ll pay attention, you understand.  Hang on, Phil’s calling.”, he said.  Yeah, I figured there was a reason… and I wasn’t complaining, just so you know, I thought.  And then I saw that he was right, as usual… Phil WAS calling him.

… on the TV. And I turned the volume up even louder.

Reedenstein: “Perfect timing, too! I can hear them about to eat, and Phil’s saying grace! I’m gonna join him with my appetizer of M&M’s while I wait for my supper snacks.”

The “Stein” was KILLING me, but I managed to slip out a monotone:

“Yeah, you get down on those baby’s. Fingers & sauce should be there any minute.” 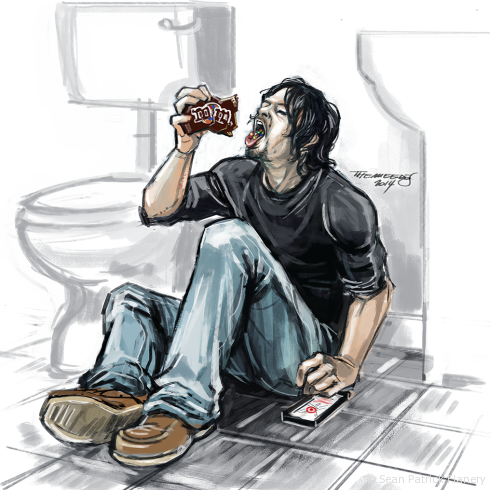 Through the phone, I could hear the bag rip open. Then, what sounded like hundreds of M&M’s hitting his teeth… and then just crunching. Lord almighty, this fucker was fiending on those babies like a fucking famished eight year-old that’s never seen the first aisle of a 7-11. By the way it sounded, even I hadn’t ever enjoyed an M&M like this fucker. That is, until I hear him cry out:

I heard gagging, spitting and coughing coming from the bathroom, while my chest was HEAVING with contained hilarity. But I DID manage a somewhat believable:

“What the fuck man! You alright?”

Reedenstein: “Oh God! Fucker put something in the M&M’s! Taste like Mr. Clean or something! It’s really tart man, even made my butt cheeks pucker up a little bit! You gotta fuckin’ hurry!!!”

As he kept rambling on, I finally hit “send” on a text message that I had been writing from my TextPlus app, which is an app that will allow you to send text messages to anyone from a unique number other than your own. The text message read:

YOU HAVE BEEN DOSED WITH A COMA INDUCING AMOUNT OF ISOPROBYL CHLORIS REEDENSIDE. IT WILL TAKE AFFECT IN APPROXIMATELY 30 MINUTES. YOUR OPTIONS ARE AS FOLLOWS:

A)       SLEEP THROUGH MY DEPRAVED & VIOLATING BEHAVIOR.

B)       COME OUTSIDE, AND ENJOY IT CONSCIOUSLY. A SIMPLE INGREDIENT IN REDBULL CALLED TAURINE WILL COUNTERACT THE CHEMICAL IMMEDIATELY. I HAVE A CAN WAITING. TEXT BACK A SINGLE LETTER INDICATING YOUR INTENTION.

PS I’VE BEEN WAITING FOR THIS MOMENT ALL MY LIFE, HOLD ON. I CAN FEEL IT IN THE AIR TONIGHT, HOLD ON.

I wait… and then I hear the “ding” of a text delivery coming from the bathroom. I climb off the bed, take my boots off and place them directly outside and facing the bathroom door. I wait… and wait, as I’m sure he’s reading, until he explodes with:

“FUCK YOU, MOTHERFUCKER!!! FLANERY’S COMING RIGHT NOW, AND HE WILL FUCKING CHOKE YOU LIFELESS!!!”

Then back to me, with:

“Dude, swear to God, the fucker just sent me a text. How’d this sick fuck get my number??? You gotta hurry man!!! He doped me up man, and I can already feel it taking affect. Hey, can you also bring me some RedBull???” 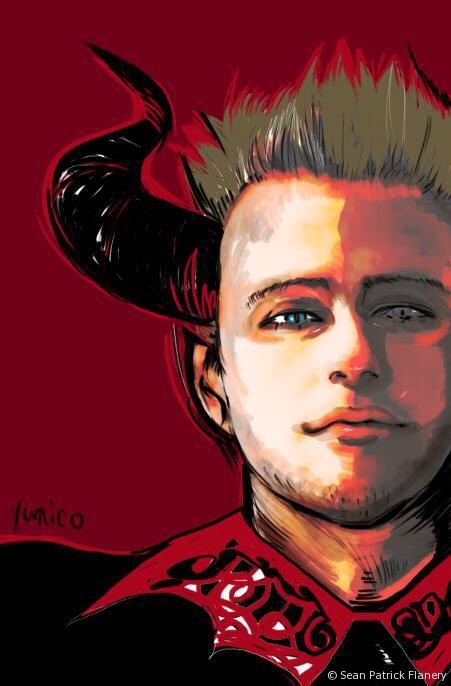 Forgive me Lord for what I’m putting the “Stein” through… but I simply can’t help myself.

What will happen to the “Stein”?  Will he get violated in a way unbecoming of a “Stein”?  …And what was on the legacy’s message board?  Be sure to subscribe to ShineUntilTomorrow at the upper right for the exciting conclusion of “The Flannenbaum & Reedenstein Chronicles” aka “This Might Or Might Not Have Ever Even Happened”.

And be sure to leave a comment of your thoughts!