Let me tell you about the night that I lost Reedus. 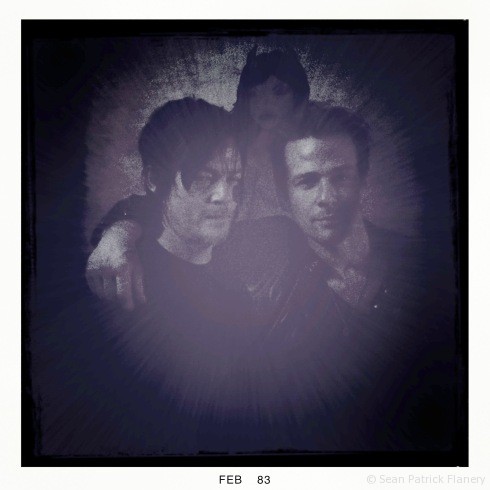 Coincidentally, it was the same night that I found Reedus. We were at a Wizard World event. And I just wanna go on record and say that I’ve never not known where that fucker was. It was about 12:30am peeking in on a Sunday and I was on the 18th floor of this hotel in Nashville, Tennessee when I get a panicked call from Reedenstein telling me he’s been kidnapped. But I guess I should back up to a couple hours earlier when there were about 14 people in my room and at least as many empty bottles of shit that would probably set your soul on fire. It must’ve been nearing 10PM and I was about to kick them all out because a UFC was about to start that I had ordered on my computer when I hear Reedus yell out “I’m riding that fucker! Take me to him NOW!” I was already backed up against the headboard of my bed with my laptop on my legs getting ready for Bruce Buffer to tell me “IIIIIIIIIIIIIT’s TIIIIIIIIIIIIIIME”, and I had no intention of leaving, or even finding out who or what exactly Reedus wanted to ride. So, I yelled to Reedus as I heard everyone file out the door that I’d meet him there after the fights were over and to just text me the address. So, I watched Caine Velasquez  kick Junior Dos Santos’ ass and was starting to drift off to sleep after never having got a text from Reedus, when my phone starts wailing those throbbing opening guitar licks from “Kundalini Express” by Love And Rockets, and I knew it was him… and that I was about to take a ride. “I think they kidnapped me, homie” actually preempted me from even saying hello. I asked the fucker who kidnapped him, why he thought he’d been kidnapped, and where the fuck he was. The conversation went something like this:

Reedenstein: “They got me locked in a bathroom, bro! Come get me!”

Reedenstein:   “No, it’s a hotel room bathroom and I can hear those fuckers right outside the door plotting some shit… SICK shit probably.”

So, I immediately throw my britches back on… cause I like to freestyle when I’m sprawled out on my bed. Then I turn the TV on, so there’s a bit of audio reinforcement for my DO NOT DISTURB sign (yeah, I know, I just don’t like people coming into my room unless it’s to put chocolate on the pillows… and I’d already had 5)… and I tell him:

“Okay, Go into your settings right now and turn on your FIND-A-FRIEND. Fuck that sick pervert, I’m on the way. Don’t open the door for anything. I’ll be there in a second. But stay on the phone with me… don’t hang up!”

And BOOM… I was out the door just as my FIND-A-FRIEND was finally registering a location. Now, the FIND-A-FRIEND is a pretty cool app for dudes with buddies that tend to drift. In a pinch it’ll give you a little polka dot for your location and another for your buddy… and they move in real time, so you can even Marco Polo that shit down to the last FOOT as you close in. One thing I know, if this fucker so much as TOUCHES Reedus… he’s going to sleep.

At this point I’m confident.  I’ve been here before, so I’m pretty sure I’ll find him before his captor does something devastating.  I sprint down the hallway toward the elevator as I finally hear my door click shut behind me.

Reedenstein: “Dude! Wait a minute… I think someone just left.”

I locked up my feet, slid to a stop, and froze right there in the hall staring down at my phone screen. Then, I decided I’d honor Michael Jackson’s memory with a fucking Billie Jean grade moonwalk back down the hallway straight to my door, until I finally dropped my key card back into my room door’s mechanism to hear it buzz, click, then unlock.  I step inside… and sure enough:

Reedenstein: “Bro, he’s coming back in… Can you hurry?”

I thought to myself, Mother of GOD… could this level of comedy have REALLY just landed in my lap?  “Shh, my child.  Why yes, it could”, I heard Mary say.

At that point, my whole body relaxed from DEFCON-5 and was replaced with a Hungry Man portion of “Let’s fuck with Reedenstein” as I saw his polka dot right fucking on top of my polka dot! I was right outside my room’s closed bathroom door, so I cover my mouth, and just whisper into the phone.

“Okay, listen closely… I’m on my way, but you gotta give me more information. Wait a minute, you said ‘he’… how do you know it’s a guy?”

Reedenstein: “Cause I’m peeking under the door, dude. The fucker’s wearing cowboy boots. Scary ones.”

I raised one of my boots up to look at this “scary boot”, trying to figure out a Reedenstein perspective and he shoots back:

“Dood, the guy’s right outside the door, and now he’s just standing there on one foot & it’s freakin’ me out. Hurry up… this dude’s crazy. I know he’s planning some sick shit to do to me too… I can tell!”

So, off come the jeans and boots and I’m right back to freestylin’ on the bed, cause I know that I’m gonna milk this shit for a while. 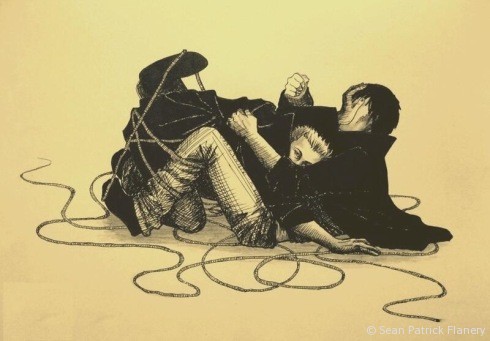 Welcome to… “The Adventures Of Flanenbaum & Reedenstein”  aka “This Might Or Might Not Have Ever Happened Pt. 1”

ps  In full disclosure, to this date, there has been zero corroborating evidence to support any such event ever occurring.  Nor has there ever been anyone to publicly deny any said events.  Or sentence fragments.  I myself, will neither confirm nor deny.

BUT… I’ll be back soon, with the exciting conclusion.